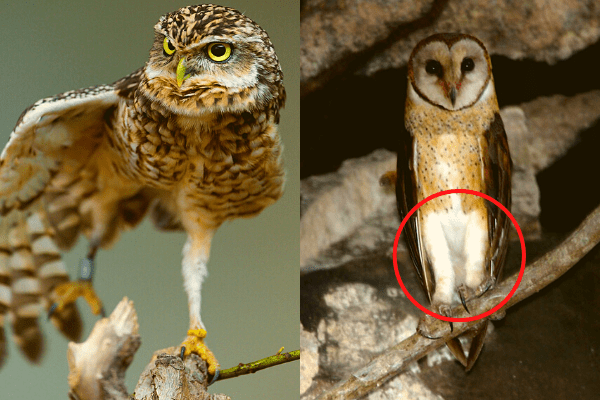 The legs of the owl are actually long, which makes perfect sense. They are the main driving force behind lethal claws used to hunt. Owls first swoop their feet to strike and then grab prey, so it makes no sense to possess weak claws. They require long, strong legs that are able to hold their sharp claws. Actually, owls’ talons are among the strongest of raptors because of their astonishing power, they can put approximately 30 pounds of pressure when they press their talons against their prey.

The owl’s legs are linked to their pelvis, which is common among birds that hunt mostly using their feet. Additionally, they have a fibula that is long which allows the owl move its feet and legs to increase their movement when they catch prey.

Owls hunt all kinds of rodents, and other smaller mammals to reptiles, birds larger moths including fish. The legs are the tools they employ to capture and kill their prey. It is typically done by grabbing the prey with their talons, then constricting or stabbing it until it dies. Sometimes, further strikes are delivered by the beak. (Yikes. It’s not difficult to imagine the scenario from a mouse’s or a vole’s viewpoint.)

In hunting, the owl’s frontal toe is pointed in the direction of anisodactyl. The owl opens its talons in order to increase the likelihood of hitting the target successfully. The sole of the foot has a rough, knobbly surface to assist it to grip well along with the bony structure inside the feet are quite small and sturdy to withstand the collision with prey.

The feet of owls are more bony and more robust than the rest of birds. The underside of their feet has rough surfaces to provide greater grip. Their claws become locked which makes escape impossible for prey. Owls have four toes. while flying, or perched on a perch three of them face forward and the other faces backwards. This is called the hallux.

Their toes are small, thick, and large apart from the hallux. The front toe’s outer edge will turn backwards when the owl is holding prey to give it a more firm grip. The hallux can be used to poke the prey. If the prey is not dead it will apply pressure for it to crush its victim using its talons. The talons will break the prey in smaller pieces when it is too big for a single bite.

At the end of these lengthy and slim legs are four toes that are on each foot. Even though owls are classified as zygodactyl having two feet pointed in the direction of forwards and backwards the toes on the outside of each foot has the ability to rotate to face in any direction. When it is at rest, it points toward the front, with a slight swathe towards the side, however when an owl is perched on a tree or securing prey, it turns in the opposite direction. Like all predators, the owl has the mechanism of a ratchet in its foot to allow it to grasp without straining its muscles.

In the case of the owl’s legs, being thick and long doesn’t mean fragile: Talons and owl legs can be very strong. If you’ve watched the owl’s attack in the video above you’ll know what kind of prey an owl is able to take. The owl is the first to lead feet, and it is said that a Great Gray Owl can punch through snow that is strong enough to hold one’s weight as a person who weighs 176 pounds.

Owls possess powerful talons that they use to capture and kill prey. So, it is only natural that they would require powerful legs to fend off any prey. The owl’s legs can also be stretched out, allowing them to have the ability to hit prey with utmost precision.

Do Owl run fast with their long legs

Owls are able of running, but there’s not much information about the speeds they’re capable of achieving. The fact that the owl is able to run isn’t a guarantee that it’s normal to run. They’re far more adept at capturing prey using their quiet flight and striking from above using powerful claws.

It is believed that the Burrowing Owl is one of the fastest owls to run in the world. If you’ve witnessed one of them running, you’ll notice that they’re quite quick in their running. They may pursue and capture prey on the ground with their feet.

Which Owl has the longest legs?

“Eagle” Owl (bubo bubo) might be the owls that have one of the longest legs . Based on their being among the highest-groomed owls around the world. This means that their legs can range between 20 and 30 centimeters.

Owls of different species with different kinds of legs