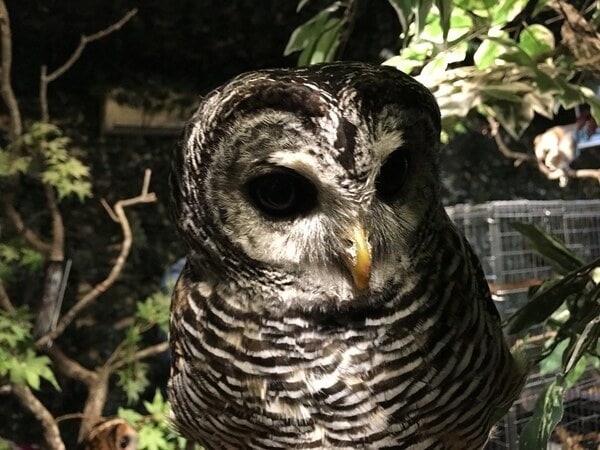 The Rufous-legged Owl ( Strix rufipes ) is an endemic forest-specialist bird that was thought to be the least known owls in South America. This species is in decline numbers due to habitat loss. Recent research has shown that this species is tolerant of some disturbance to its habitat however, it still requires a complicated forest stand structure that includes massive, dying trees.

A large, round-headed Owl with dark brown eyes and no ear tufts. This species has a layer of feathers that range from cinnamon-buff to orange-brown on both legs as well as its toes.

The tail is dark reddish brown and has buff bars. Its throat color is white. and the bulk of the lower parts are white, with a few black bars. The vent is orange-buff. The toes and legs are covered in feathers that look buffy. The chick’s face is a downy off-white. The young chick is warm buff with slight dusky brown barring, and the face is tawny.

Thick and Humid forest on the slopes of mountain mountains and in lower elevations. Semi-open forests and woodlands

Where can you find Rufous-legged Owl ?

The rufous-legged owl can be located in Chile starting around Valparaiso Province and in far western Argentina starting from Mendoza Province south to the edge the tip of Tierra del Fuego.

The only bird specimen from S. R. sanborni was taken on Chiloe Island off the coast of south-central Chile. It is a species that thrives in humid old-growth forests with an open canopy and dense understory. It can also be located in secondary forest that is older as well as semi-open forest. Its elevation can be found anywhere from sea level up to at minimum 2,000 m (6,600 feet).

While it was first discovered to 1828 in England, it remains extremely difficult to locate, and its behaviour, ecology and vocalizations as well as nesting biology have been poorly studied.

Not many people have the pleasure of hearing its call , which is a handful of grunting, low notes, followed by a string of nasal sounds that are high pitched. Although the rufous-legged Owl isn’t thought to be threatened globally however, it has suffered significant habitat loss in a few areas of its habitat.