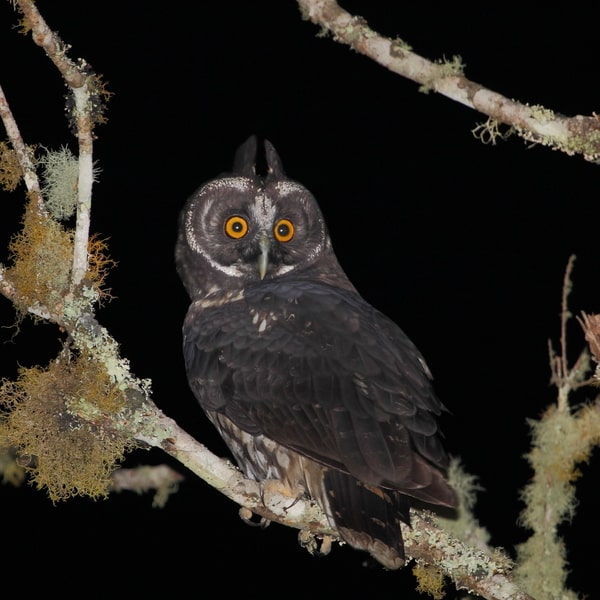 The Stygian Owl can be found in Mexico, Central America and the Caribbean. Although it has a wide range and is not usually migratory, two specimens of this species have been discovered in Texas. Stygian is a name for the river Styx. This term likely refers more to the species’ overall dark coloring than to any association with hell. As you can see in the photo, the ear tufts are only visible when the owl’s alert or agitated. Relaxed Stygian Owls are less likely to have ear tufts.

The owl can be found in forested areas such as pine forest and semideciduous woods. The owl breeds between January and April. The Female is aggressive in danger. The female was more likely to use wing clapping as a threat display.

How to identify a Stygian Owl

The facial disc is dark brown with a finely speckled lateral edge. The prominent and short brows are whitish. The eyes are yellow-orange-yellow. The bill is blackish and the cere is greyish brown. The ear-tufts are prominent and long.

The upperparts are dark sooty brown, while the forehead and crown are mottled pale. The back and mantle are almost plain with faint spots on the outer webs and feather edgings. The primaries are almost plain brown, with rows of indistinct pale spots. While the secondaries are light and dark, they are barred. The tail is a sooty-brown color with some paler bars.

The underparts are pale and bared with dusky breasts, and the rest of the body is covered in dark shaft-streaks or cross-bars. Tarsi have feathers, and their brownish-flesh feet are partially feathered with short plumes. The claws are made of dark horn and have blackish tips.

The habitat of the owl is varied, with evergreen and deciduous forests as well as open areas with patches of forest. It can be found at elevations of up to 3,100m (10,200 feet) above the global sea level.

It is found in South America, the Caribbean and some parts of Central America. It is distributed in Mexico, Guatemala and Colombia as well as the Isles of Pines, Venezuela, Paraguay, Argentina, Brazil, Paraguay. They use forests primarily as nesting places during the day.

Although it is not possible to determine the exact lifespan of the Stygian Owl, it can be said that owls live for 25 years. The Stygian owl may also live up to 25 years.

Two eggs are laid by females in nests constructed of sticks from other birds. These birds can nest on the ground sometimes. The eggs are incubated only by the females. Both parents feed the chicks after they hatch. The little ones are born with blue eyes, which is different from their parents.

Researchers and biologists don’t see it at night so they call it Ghost Owl. This behavior makes the stygian-owl one of the most understudied owls. Stygian is “Gloomy, Dark”. It is derived from the greet work “River Styx”, which means “Souls of Dead”.

The call of the male Stygian Owl is characterized by a deep sound while that of the females is a louder sound. Both genders communicate with their young by making sounds that are exciting. When they are hungry, the chicks make vocalizations.